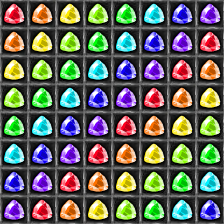 What's on your mind?

I want to play Gemcraft 0 and 1 but I can't seem to find the full versions anywhere. Is there any way of modifying the swf file to get the full edition or any chance they can end up on Steam?

Is it possible to beat endurance with max traits? With the HP calc from 12345ieee I can see that the last waves could have some e116 HP. Currently I'm wizard level 22k. My last killgem doese 3.168e37*4.387e29 damage, which means I can handle enraged e70 HP monsters (until wave ~600). I need several days to finish an endurance, resulting in 1e12 EXP -> increase of 600 wizardlevels -> +4200 skill points, but on the other hand the upgrads are so expensive that my next killgem wont be much better. I compare the damage of the lvl11 Spec + 5 times the lvl19 combine -> lvl111 Killgem with 1.224e38 mana cost. Additionally the managem is also improved which results in more mana which made is possible to apply additionaly combines to the lvl111 killgem, but the gap between e70 and e116 is hugh. It will take years of playing :(

I'm guessing I need another approach to beat endurance. Maybe with Wake of Eternity and Freeze? With 70% health loss, I must apply WoE 88 times to reduce a 1e116 HP monster to 1e70 HP. With an upgraded Freeze and WoE Spell this should be possible. I only have to avoid enraging the mana burn and the beacon monster. Ony the game lag could make a problem... Has someone with a higher level already tried this approach?

No, really. It seems I was the only one to make any edits in a few days, so... Just asking, is there anybody alive right now?

It has been bothering me for some time now, so I want to ask, if a mana-gem has a chain-hit of 10k, but there are some 5k monsters near the trap, do I get 1/2 of the max mana each hit from the gem? If so, what a waste.

Though it is inevitable since the game is Flash-based. Rip (Such lag begins with 5k monsters + BACONS)

I've written up a few early chapters for a story named "Gemcraft: Jewel Shards - Beginnings". I was wondering if anyone would be interested in reading it.

i have seen a lot of old discussions on compasses, including the one given by wiki at the begining of this blog. maybe because english is not my home language (I'm French) but I think I've done all steps requested but probably make a mistake. compass fields, from C2 to X7 are completed (grade 5). I have replay the level looming for all fields. I have changed the grade 5, and then recover the grade 5 three times and ... no result.

where is the mistake?

This game gave me some trouble to beat when I was younger, but is now one of my favorite flash games on Kongregate.

Here's the basic rundown of what you need to know to beat this game:

The controls are hot-keyed to keys 1-5.

You put the gems in the tower and they do damage to enemies. You can hover the mouse over the tower to read the description of what the gem does. Press the button to combine gems and drag a gem using the mouse over a gem in the inventory to combine them. The moats are great at slowing enemies down and towers are needed to put more gems in them.

As you level up invest all your skills in the powers for more mana. You can reset which powers your skills are in at any time. Once you are able to get to the first epic wave, you will need to go back and get better scores on the previous levels to level up to 19 and get all the mana powers.

The next big upgrades are for the buildings and the medium gems (high is the best). This is important because you will want to build towers in sets of (3,6,9) to get the corresponding bonus points at the end of the round. Also now you will be able to use the ctrl button when clicking on the build gems button at the end of the round to create lots of gems. Do the same for the combine button. Then throw all gems at the monsters during the final few rounds to get the bonus points for gem bombs thrown.

You get more points/mana by killing monsters as soon as they appear, so the best strategy near the mid/end of the game is just to stack the front where the monsters come out with towers and moats and put your best gems there.

For the final boss keep using the mana button for higher max mana and more mana, like a madman. Get it to around 40k. This will force the final boss to run multiple laps (he takes around 7,500 to banish). All you will need to do is have 3 level 5-6 purple gems and kind of rotate them around the map, the top if he's there, or the middle section if he's there so that you can get his armor down and then kill him.

I figured that this particular wiki isn't all that active, as the last post (of which I have seen) was from 9 months. I'd like to jump-start it back up.

What is your favourite type of Shrine?

I'm level 120 and I play without the Pouch on Chasing Shadows.

I wanted to know why and how could I solve my problem.

There is a discussion about the new Field pages for GC2 that may interest more people here:

Hello, I'm not really sure which levels V5 and V18 of Chapter 2 (obviously) originally came from. I know all of the other vision maps, but have trouble working out these two. Please tell me which fields/levels these came from.

I have noticed that random waves battle trait makes non-normal waves far more common. On many fields, over 2/3 of the later waves are non-normal. Is this intended, and is this too much for 1.13x XP?

I wounder if starting waves early is worth the risk. Usually, I only get max 200 mana per wave started early, and the risk can be quite high. On early waves, the mana earnt is tiny. In fact, it might not even compensate for the shortened game time (you also get mana every second). There are times when it is beneficial (starting a swarm or runner wave right after a giant or armored so that the fast wave outruns the slower one). I would like to know if it is worth it in other cases.

Try as I might I can't get the compasses to behave. I've followed the steps in the article on here but no sign of a gem and no idea of what I'm doing wrong.

Is the article accurate?

I know lots of about the game and would like to share this knowledge. Some of it is spread over AG forum (http://armorgames.com/community/thread/12313188/gemcraft-cs-important-links), some is only in my head.

I'm good at technical stuff, but need somebody to write it down and organize. Who would like to help me?

My AG nick is psorek

After much waiting, Gemcraft is now out on ArmorGames!  Check it out, and feel free to post your thoughts on the game in the forums.

(edited by LevenThumps)
GemCraft Chapter 2: Chasing Shadows
on which levels can the trees be bombed?
(edited by A Fandom user)
GemCraft: Labyrinth
Guidelines